About 45 kilometres northwest of Nanaimo is a small town (pop. 1,600) that has gained a reputation as a must-visit spot for tourists and islanders alike. How did Coombs manage to earn such status? Well, the goats are a big draw, as is the jam-packed country store stocked with everything you need—and a whole bunch of cool stuff you probably don’t. And of course there’s the food, from farm-fresh, healthy fare to tasty treats.

If you cruise into town from the south end, however, your first encounter with Coombs might get you wondering if you’ve just time warped back to the early 1970s. Kumbaya indeed.

A hippie store? I was too young to be part of the peace and love movement, but I’ve seen Hair, so curiosity drove me to find out what Coombstock had to offer.

As I browsed through the somewhat pricey tie-dyed T-shirts, hoodies, and tank tops, listening to the Beatles sing “Let It Be”—with enthusiastic backup from the grey-bearded proprietor—it quickly became obvious that the store was less about authenticity and more about nostalgic marketability. If I had been one of those who dropped out way back when, I suppose the words “selling out” might have sprung to mind. Or maybe, less harshly, “cashing in.”

But I resisted cynicism and instead found myself amused by the vast, colourful, and creative ’70s-inspired inventory. Footwear? How about reefer-patterned socks, or perhaps a pair of mismatched Solmates (because “life’s too short for matching socks”).

For those with not quite kiss-friendly breath, Stoner Mints. Remember those adorable VW vans—aka hippie buses? Miniature versions, in various colours, are available here (groovy artwork not included). Incense, beaded bracelets, headbands, moccasins . . . you get the idea.

As you move up the highway after your immersion in the ’70s, you might be forgiven for thinking the sights get a little trippy. Up there on the right . . . is that a pink castle—with a boat attached? Don’t ask me. Go ask Alice.

The square anchored by the Coombs Emporium isn’t off-the-charts odd, but it’s certainly up there on the unusual meter. The Emporium itself is what one might expect: a large tourist-targeted space full of artisanal wares, such as handcrafted wooden furniture and jewellery.

Along another side of the square, Cozy Corner Books looks and feels like a small-town bookstore should, with ceiling-high shelves crammed with thousands of books on an eclectic range of subjects.

But in the square itself, arranged without apparent rhyme or reason, are dozens of stone statues of Buddhist figures, marine creatures, and land animals. Here, dogs don’t play poker; they drive cars. 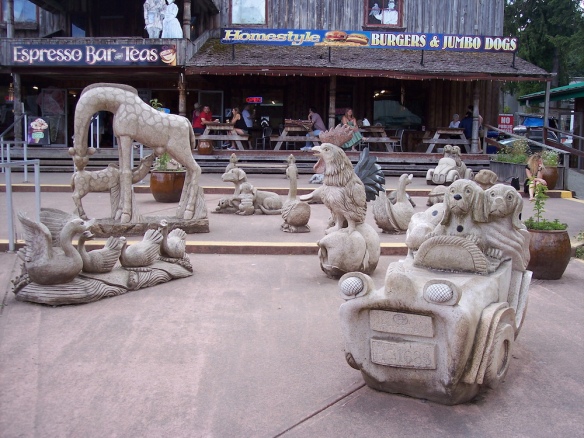 These are no museum pieces, and visitors big and small are welcome to touch, climb, or sit on any and all of them. Oddly, or maybe not, there’s no signage explaining what this display is about. Perhaps the meaning is in its randomness. Or not.

As village squares go, this one is definitely something different.

And speaking of different . . .

Goats on a What?

Ask people to name their favourite animal and I’ll wager you won’t hear goat mentioned among the top 10, or even 25. Yet folks from all over flock to Coombs to see goats. But not just any goats. Goats on a roof.

Why goats grazing on a grass roof should be so popular is hard to explain. Obviously, there’s the novelty factor; have you ever seen a goat on a roof? But novelty fades over time, and goats have been hanging out on this roof for over 30 years. Perhaps it’s the pure ridiculousness of it. Or the charm of its simplicity. Or its clever practicality: Build sod roof, grass grows, grass needs cutting, get goats. Problem solved. 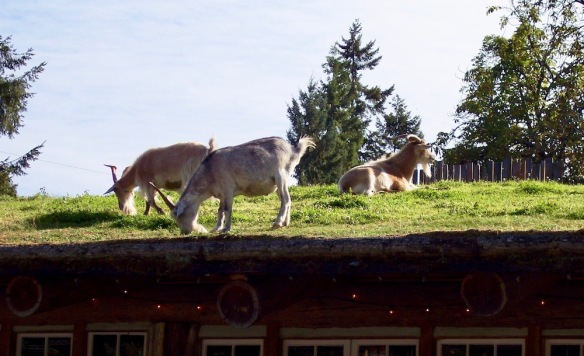 And what a fantastic marketing hook!

The goats live on the roof of the Old Country Market from spring to fall each year. Why the lengthy hiatus, you might wonder? Do the soggy BC winters make the sod slippery? (I’m guessing Goats Slipping Off a Roof would probably not be so charming—though there would undoubtedly be an audience for it.) The simple truth is, like many of us, they head indoors to keep warm.

While the goats themselves appear only seasonally, Goats on Roof merchandise (you saw that coming, right?) is available year-round inside the market, where you’ll find Goats on Roof coffee mugs, shot glasses, T-shirts, fridge magnets, bumper stickers, postcards, and playing cards. For the goat-enthusiast foodie, there are Goats on Roof sauces, maple syrup, coffee, and goatradish. All items carry the distinctive Goats on Roof logo, which graphically warns of the potential “downside” of this whole enterprise.

It might be fair to say these goats have been milked for all they’re worth.

To Market, to Market!

I just know this question has popped into everyone’s head at one time or another: “Where can I buy a fresh-baked loaf of cheese bread, arts and crafts supplies, and a suit of armour all under one roof?” Well, ponder no more, my friend, and wander over to the Coombs Old Country Market. 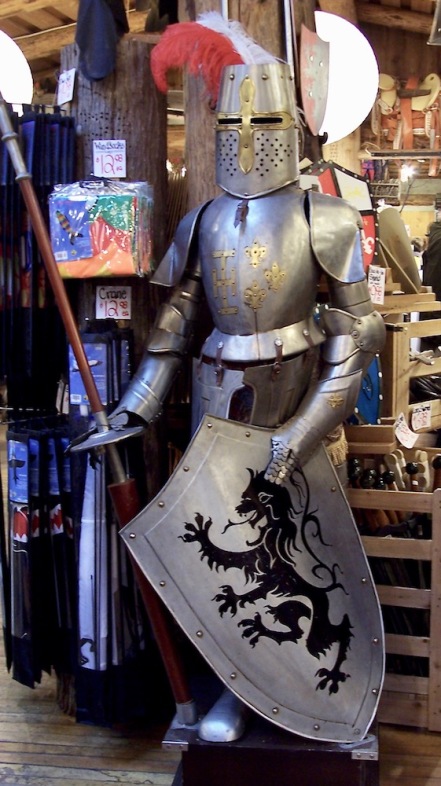 Without a doubt, this shop redefines “country market.” Offering international foods (Asian, Mexican, Italian), baked goods (sweet and savoury), meats, cheeses, teas, kitchenware, imported toys, baskets, hats, lawn ornaments, dinosaur excavation kits, and a thousand other things—along with an in-store restaurant—the market literally has something for everyone. It’s easy to spend an hour or more roaming the aisles; delightful discoveries and unexpected oddities appear around every corner. And in keeping with Coombs’s affection for the past, Elvis, Ritchie Valens, and other 1950s chart-toppers keep the mood upbeat and energized. Whether you’re a buyer or a browser, the Old Country Market is definitely worth your time.

I Scream, You Scream (You Know the Rest)

A stone’s throw from the market is Billy Gruff Creamery, another must-stop spot. Hot day, cold day, and every kind of day in between, there’s never a wrong time for ice cream. And when there are over 50 flavours to choose from, what excuse does anyone have to walk on by? (Well, besides lactose intolerance.)

For me, making the decision to buy a single scoop in a waffle cone was easy. Choosing a flavour . . . now that was the challenge. The creamery offers a lot of the usual standards: pistachio, chocolate peanut butter, rum raisin, and for the truly timid, vanilla. It’s got kid-friendly flavours like bubble gum, cotton candy, and birthday cake. It even has a flavour for those with a taste for the macabre: shark bite, a greyish blue ice cream with a red raspberry ribbon (yum). As a chocoholic, I was torn between Boston cream pie and black forest until my eyes fell upon . . . Kahlua chocolate fudge. The deal was done, and a towering scoop of deliciousness soon transported me to ice cream heaven.

I have a gut feeling I’ll be visiting Billy again.

Before anyone from Coombs has a conniption, let me say for the record that this town has more to boast about than goats.

There’s the produce market, which offers an abundance of fresh local fruits and vegetables. Down the road a kilometre or so from the Old Country Market is Butterfly World, where visitors can stroll through a greenhouse displaying butterflies from South America and Asia. Every summer there’s the Coombs Fair, a two-day agricultural event, now in its 105th year. There’s also the three-day Bluegrass Festival, held every August and now in its 40th year, featuring performers from across Canada and the United States.

All of which makes Coombs impossible to categorize—except for memorable. This small town is surely that.

3 thoughts on “Feelin’ Groovy in Coombs”