We’re now in late January, and the Christmas holidays are well behind us. Ornaments, wreaths, and bells have all been packed up and stored away till next season. But out this way, Nanaimo continues to “jingle”; in fact, the city jingles year-round. For as I’ve learned in my local travels, the delightfully named Jingle Pot Road appears here, there, and (it seems) almost everywhere. Drive along the Nanaimo Parkway and you’ll cross Jingle Pot Road not once, but twice. The road loops around. It morphs from other roads. And at one corner of town, it even meets itself.

With all this “Jingle Potting” going on, I got to wondering: Just what the heck is a jingle pot? It seems its origin dates back to Nanaimo’s mining days. When coal cars arrived at the bottom of a mine shaft, a worker would tug on a rope that was attached to a pot at the top of the shaft. The pot was filled with small stones, and the tug of the rope would make the pot jingle. The noise of the jingling pot would alert another worker to start hoisting the coal. Hence, a “jingle pot.”

When I first encountered Jingle Pot Road, I was amused. Little did I know that whimsical street names are a Nanaimo staple. Care to take a walk along Buttertubs, my little Chick-a-Dee? Oh my, what would Bob-O-Link think about that? Not run-of-the-mill names, to be sure. But they get stranger . . .

So who is responsible for this fun foolishness? It seems a longtime mayor had a lot to do with it.

Frank Ney was mayor of Nanaimo, off and on, for 21 years. By all accounts, Frank was a colourful character. While full-time mayor, he was also a part-time pirate, with the moniker Black Frank, and enjoyed greeting people at the harbour dressed up in one of his five pirate costumes.

Like a true rapscallion, Frank enjoyed a drink or two . . . or quite a few. He had a hand in initiating Nanaimo’s Bathtub Race, still an annual event, and once referred to Nanaimo as “the bathtub capital of the world.” As the mayor and a land developer, Frank had the power to name new streets. Sometimes he would offer to name streets after potential investors, but other times he would ask one of his 11 children to come up with funny names—which they happily did. As musician and Frank Ney biographer Paul Gogo remarked, Frank “just wanted people to be happy and make the most out of life.” Silly street signs are just one of his many legacies.

The Hood From the Woods

Not every Nanaimo neighbourhood features funny street signs, however. In some parts of town, the streets are theme-related. This isn’t a novel concept, I’ll grant you, or a clever one. In West Los Angeles, where I used to live, many streets are named after U.S. states. In Santa Monica, a handful of streets are named after prestigious universities. Streets and roads named after trees or flowers are not uncommon. But aren’t they all just a little bit . . . boring?

Cut to Nanaimo, where who rules one neighbourhood? Why, it’s the famous English outlaw—Robin Hood! 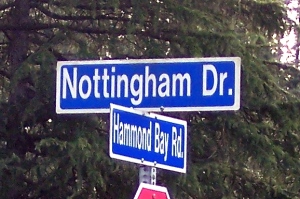 I’m not sure if Black Frank had a hand in this, or if it was the idea of someone fond of men in tights, but either way, these Nanaimo streets take the notion of theme-related names to a playful new level.

A Street by Any Other Name

Them smugglers oughta knowed better than to “cross” the law!

When I first moved to Nanaimo, I wanted to live on Jingle Pot Road. I didn’t know what was on Jingle Pot Road—in any of its incarnations. I just loved the name and wanted it for my address (very sound logic). Big surprise, things didn’t work out that way. I ended up on a street with an ordinary name.

But that’s okay, because I can still aspire to live on a silly street one day. And maybe it won’t be Jingle Pot Road. Maybe I’ll be in a giggly mood instead. Or maybe I’ll be inclined to wiggle my twiggle.

That’s one of the things I like about Nanaimo. I always have options.

4 thoughts on “Jingle All the Way!”