I’ve been living in Nanaimo for about seven months now, and over those months I’ve grown steadily more fond of my new home. However, like many relationships, mine with Nanaimo didn’t get off to the most promising start.

It was a chilly day last December when I drove my car onto the ferry at Horseshoe Bay on the mainland. My destination: Departure Bay, Nanaimo. I was excited, eager—and anxious. I’d never been to Nanaimo before—or Vancouver Island. This was a maiden voyage for me. As the boat crossed the Strait of Georgia, I gazed back, awestruck, at the towering, snow-capped mountains hugging the BC coastline.

The view was so spectacular, I felt like I’d been transported to another world. Eventually, as the coastline receded, I turned my eyes from all that lay behind me to all that lay ahead (a rather metaphorical moment, you might say).

Alas, it was a sobering change of perspective, for what did lay ahead was a heavy grey sky looming over an almost featureless mound of land. What had I been expecting? I’m not sure. But perhaps hoping for something a little more…inspiring? But, inspiring or not, there was no going back.

Go With the Flow

As I sat in my car, waiting for the ferry to dock, I had another sobering moment: I realized I had no plan. After meticulously plotting my 1,200-mile journey from Los Angeles to Vancouver, I was now about to arrive at my final destination—without a destination. No accommodations booked. Not even a list of maybes.

The cars in front of me began to move forward. I followed them…and kept on following them—off the boat, out of the terminal, and into island traffic. When you don’t know where you’re going, you go with the flow—literally.

I eventually ended up on the Island Highway, heading south. I was feeling disoriented—and unnerved as the city faded behind me. I needed to pull over and get my bearings. And then I spotted…a Days Inn. Okay, not exactly the Hilton. But it was a name I recognized, and familiarity is welcome when you’re discombobulated. I got a room and settled in for my first night in Nanaimo.

The next morning, after a free continental breakfast that was grossly overpriced, I set off for the Nanaimo Visitor’s Centre. My goal: find a decent place to stay with a rate I could afford.

The Visitors Centre volunteer turned out to be extremely helpful and informative. She gave me maps, a list of motels that offered weekly rates, and advice that only a Nanaimo native could provide. After some further research and a few phone calls, I set off to find lodgings—this time with a plan.

Lingolocks and the Three Motels

Motel number one was so bleak, I didn’t even get out of my car.

Motel number two looked a little more promising. I asked the desk clerk if I could see the room before checking in—a wise move. The room had two lamps, with about 80 watts between them—maybe less. From dreary outside to dreary inside. On to number three…

Maybe Goldilocks would have had better luck, but my third motel was not “just right.” But by now it was dark, I was tired and hungry, and my standards were dropping. So I checked in. Pleasant discovery: my room had a mini fridge and a microwave—very handy. Unpleasant discovery: along with the microwave came the lingering odors of meals past. I did a security check: no deadbolt lock on the door and no chain, and a posted notice informing guests that there was no staff on site overnight. A smelly not-too-safe room. Terrific.

I headed out to get something to eat. I didn’t feel like driving or venturing far. My options were a 7-Eleven and a McDonald’s. Grim pickings.

McDonald’s was almost empty. I ordered fries and a shake—comfort food—and sat down. Suddenly a bunch of twenty-somethings burst in. What struck me right away was how thin most of them were—and not too in the pink, health-wise. They were a noisy, wired group, and I caught some conversation about police, probation, and rehab. Tee-riffic.

I checked out of motel number three the next morning.

Cut to the chase: I ended up at a Travelodge, where the room didn’t stink and the free continental breakfast was quite good. And where I felt safe—with a proper lock and 24-hour staff on site—except for the night when a man hammered on my door at 2 a.m., demanding to be let in. (Apparently he had the wrong floor. Tell that to my pounding heart.)

Just as with human relationships, our relationship with where we live evolves, and first impressions don’t tell the whole story. Not even close. Nanaimo has its nice and not so nice parts of town and is populated by people who are doing well and people who are struggling—just like every place I’ve lived.

The city also has beautiful parks, a scenic waterfront, a vibrant arts scene, and fine places to eat. 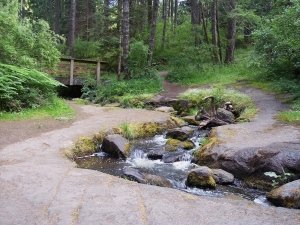 And it has an abundance of friendly people who count themselves lucky to be Nanaimoans—as I now do.

That gloomy mound of land has turned out to be so much more.

10 thoughts on “Welcome to Nanaimo”